What are some of the biggest mistakes people make when embarking on a fitness journey?

A collection of things that I wish I had known when I was starting out with exercise. There will probably be a part two to this, there are so many things I could list!

The most common thing I get asked is, “why am I not losing weight/toning up? I go to HIIT, I run every week, AND I do body combat.” When I ask how long they have been following this routine for, they tell me a year. Right so, you’ve been doing the same exercises, in the same environment with no real way of progressing with those exercises for a year. Your body has got all the adaptation it can from those classes and running in the first 3 months. There-after, you’re maintaining its normal routine. Another example, when I worked in the banking office, I had a colleague come and ask me about his weight loss. He advised that a year previously, he had purchased a bike and began cycling to and from work every day, which averaged about 10 miles. Within the first few months he had lost 2 stone. He was chuffed that his new routine not only helped his health but saved him money too. A year later, he advised he had gained the weight back on and even more! His diet wasn’t particularly good. Meal deals, biscuits, crisps, takeaways etc. He advised that he didn’t change his diet before though, the cycling was enough to help him lose.

Unfortunately, his routine was just not stimulating enough anymore. If you have cycled 10 miles a day, 5 days a week for the last year, your body knows exactly what it’s doing. It’s not challenged. It’s not surprised. It’s not working hard to try and build muscle or burn fat because it can do this cycle with its eyes closed. Which takes me onto my next point…

It’s hard to continually progress with cardio for months, let alone years on end without getting bored or sustaining some sort of repetitive strain injury. Unless it is your passion and you live for running, cycling triathlons etc, it’s not the most effective way to burn fat and sculpt muscle tissue. In a gym, there are 1000’s of exercise combinations, training methods, techniques and styles to do. Look at Arnie. He’s been lifting weights for sixty years and hasn’t gotten bored! I have been doing it for eight and have no intention of stopping. But I know I definitely could not have kept up running three – five times per week for the last eight years. You can run a bit faster or for a bit longer, but your body still adapts to that exercise. And it’s not very challenging for it. Hence you will plateau much more than with a varying resistance programme (like my colleague above.) What happens mentally when you plateau with cardio? You are tempted to give up. Yes, you may go back to it six months later, and yes, that first month you’ve shocked your body again so you might get some results. But then the same thing happens again. It gets bored, it stops adapting to your boring programme and the results cease.

Coming from someone who used to do this, I learnt the hard way. I only used to do a five minute cardio warm up before going straight to heavy lifting. I didn’t do any joint mobilisation, activation, rolling, dynamic stretches or anything to complement my training. I just wasn’t advised the importance of it. I used to get niggle after niggle until I got a serious injury and couldn’t train for quite a few months. That really made me listen. It sucks if you are a month into your new workout life, to then pull something that means you can’t do the thing that makes you happy. Not only that, research tells us that your performance will be better if you do a proper warm up. Better performance means more range, more range means deeper squats, deeper squats means more muscle recruitment. This means better results.

You can’t undo ten years of bad habits in thirty days. It’s just not going to happen. If you want to unlearn all the habits that got you there in the first place and get the desired results, you could be looking at six months to a year. Of course, everybody is different and will go at their own pace, but it’s a long-term commitment. A previous client thought that I didn’t workout anymore. She thought that being in the gym with my clients was enough to maintain my physique. Obviously, this is not true. Like I said before, I have been at this for eight years. People think I have a naturally fast metabolism and that I have always been this size but that simply isn’t the case. I gain weight very easily and find it very hard to lose it. I have to put in the time and effort to maintain what I have achieved. Some people are lucky and can gain muscle and lose weight easily. My partner just has to look at a barbell and she’ll lose an inch of fat, when I have to work my arse off. But that’s life! You play the hand you’re dealt. I enjoy the process, the results and the mental strength I gain from training and I know I’ll be doing it for the rest of my life.

5. Not hiring someone to help you achieve the result you desire.

If my car broke, I wouldn’t waste the time, effort and money on trying to fix it myself. Ordering parts on eBay, watching YouTube videos, borrowing tools. It just wouldn’t cross my mind to do that because I have absolutely no idea what I’m doing. Yet, it’s what so many people do  to try and get the physical results they desire. Googling workouts that they think might apply to their goals and just hoping for the best. Yes, some may be successful in the long term, but the majority won’t. And they might quit because they won’t see any results, making them feel like a failure.

When I bought a homemade dog grooming kit for our pooch I was like, yea I’m going to save £35 a month by cutting her hair! But when it came down to it, I was not confident. I was trembling holding the scissors near her eyes and the thought kept running through my mind that I might gouge her eye out. Me and my partner spent 45 minutes just contemplating how to approach it and then gave up. It suddenly dawned on me that the £35 a month was totally worth the time saved, the reduced stress and the better result of my pooch looking good rather than like someone had hacked at her fringe with a blindfold on. 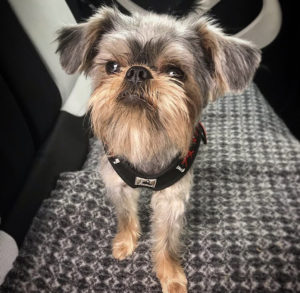 Barbs looking fresh after a groom.

This doesn’t mean you need to spend months with a PT if you don’t need to. It might be that you only need 4 sessions to be shown proper technique and give you some training methods to follow that fit your goals and body.

The difference in a personal trainer can mean you achieving your goal in 3-6 months or not achieving it at all.

6.Believing everything you read on the internet, from your mate, colleague or even PT.

What I mean by this is, all PT’s have had their own experience with fitness. They have been on their own journey and know what works for them. Yes, a lot of their techniques would work for the general population – but maybe not all. Example – I had a female client start with me who was probably about sixteen stone. Her previous PT who was male, advised her that she didn’t need to do any cardio at all, she just needed to lift weights. Over time, she became larger and decided to seek a second opinion. It’s common for males to not have to do cardio because they are blessed with testosterone and build muscle easily. But for women with lower levels of testosterone and significant ups and downs in hormonal changes, we usually need to complement our resistance training with a little bit of cardio. When she came to me, she was reluctant to do it because her PT had ingrained this thought into her. 3 months later (once I had asked her to try this new approach) she was doing the best she’d ever done.

So, it doesn’t mean that you should take theirs or others opinions as absolute gospel. For instance, I’m not a fan of keto or intermittent fasting. I tried them both and found that they didn’t work for me. Other PT’s might be big fans and tell all their clients that this is the only way to go. My approach is, If a client asks my thoughts on something that hasn’t really worked for me, I tell them to try it and see if it works for them. Just because I didn’t get on with it, doesn’t mean they won’t. Another example, some PT’s will get every single client to count their calories without any assessment of that person’s personality. But, counting calories can actually create obsession or develop mental health issues. It can create anxiety and stress for an individual it if begins to impact their daily life in a way that is not conducive to their health or diet. SO, some people suit calorie counting, some don’t. Some people like protein shakes, some think they’re pointless. Some people like CrossFit, others don’t.

In my opinion, the sign of a bad PT is one that is bad mouthing another trainer for not having the same opinion as them. Everybody is different and everybody needs to take the time to find their own way.