Am I unknowingly eating something that is affecting my mental health?

It came upon me by chance. I had entered a competition to win a book by a Doctor who I had been following on Instagram, Dr Tom O’Bryan. He specialises in food sensitivities, environmental toxins, and the development of autoimmune diseases. I found myself listening to his podcast quite frequently and being totally intrigued by his findings. 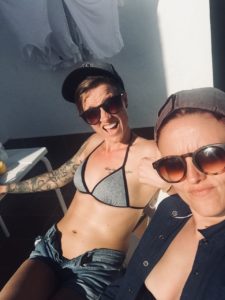 It was a friend of a friend who was running the comp to win his book and I had only entered it to help a local business gain more followers and likes, I didn’t think I would win. The book ended up on my doorstep the day before I was going away to Fuerteventura! So it became my holiday read. And I am so glad it came into my life.

Prior to this, I had suffered with my mental health. Particularly depression and anxiety. Alcohol and heavy recreational drug abuse was a release of these symptoms, which obviously were only temporary fixes and made things worse long term. Being in my early twenties though, I didn’t want to admit to that. I lost my Dad tragically when I was 19. He lived in a mental facility and the events around his death left many unanswered and painful questions. Suffice to say, my mental health was always a struggle. And times would be very difficult especially when you question the point in living.

I worked in pubs, kitchens and telesales offices. I didn’t have any real career opportunities as I had left school with barely any GCSE’s (I started drinking/taking drugs at 11, so this was quite a distraction.) I dropped out of college after one year because I was so depressed, I couldn’t get out of bed. I was lucky the tutors still gave me a qualification for the year I did.

When I was 24, my telesales experience landed me a job in a bank to train as an underwriter. I started to earn a semi decent wage. It gave me hope into what life could be like as someone with prospects and potential. I felt like I wanted to prove to others and myself what I was capable of.

I started to work on myself and my mind. I hired a personal trainer and started exercising even though I was still going out drinking and taking drugs most weekends to cover up how I truly felt. I started eating healthy foods, researching everything to do with weight training. I started to see results and compliments started to flood in that I had lost weight. It felt very good.

Fast forward another 6 years; I’m now a qualified personal trainer, living a physically healthy life, no drugs and little booze, working in a job that I’m so passionate about.

HOWEVER….my mental health still wasn’t that great. I would still have days and weeks where I can feel depression looming over me. I hate this feeling. I would have a few days where I didn’t feel quite right, then I’d have a conversation in my head convincing myself that this was the start. “You’ve felt like this before, remember? This is the start of a three month stint of the D”. It’s like I would influence myself that it was happening, and I would just accept it.

How is this fair? I would continuously ask myself. I exercise daily, I eat healthily, I drink a lot of water, I now don’t drink a lot of alcohol nor take any drugs. I’m doing all the right things! I’d called the doctor and was begging for help with my depression. I remember going through a gruelling telephony assessment for CBT on the NHS. In fact, I remember having to go through it twice because the first agent wasn’t quite sure what to do with me so booked me in with a senior on another call. And the first was hard enough. Imagine talking for an hour about the very worst things that have happened in your life, to a stranger, to then be told you have to do it again a week later.

And then when I did go through it again, the senior counsellor told me that I didn’t qualify for any help. “You don’t need CBT. You already seem to have good habits and thought patterns. You’re living a healthy lifestyle.” I hung up the phone feeling very let down and lost.

I struggled trying to figure it out myself for years after that. But I personally took it upon myself to try the hardest I could to understand what was going on in my head. I am after all, responsible for my life. I have no blame on anyone or anything. I could easily sit here and say well this happened to me so I feel like this, or that happened so this is why I am like that. But that’s crap. I am in control of my decisions and thinking processes. I can choose to have a continuous pity party, (which some days is the only thing you can do) But then you have to wake yourself up from it. You can’t be in that party your whole life. Because if you are, that’s it. Your life is gone. Over. And you’ve spent all of it wasted, blaming things/people/past experiences for why you’re not where you want to be in life.

I started my own quest of positive mental health habits. I opened my mind. I started reading articles on how foods affect our mental health. I started meditating. I started telling myself that I knew there was more to life than what I’m living through. I started to become quite spiritual. I have since become very interested in Buddhism because these people claim to be at peace. And that is what I wanted. Peace in my mind.

SO, the book. You can fix your brain by Dr Tom O’Bryan.  It’s fantastic  – changed my life actually. If you have an opportunity, please read it. He goes into a lot about different food sensitivities and various other toxins, but I am only going to concentrate on the gluten element for now. He believes that everybody is intolerant to gluten. That it’s a spectrum. You have your celiacs at the far right. People who only need to breathe gluten in and they have a reaction, and then you have someone on the far left who has no idea of their gluten sensitivity at all – Except that they get bloated after they eat pizza or a sandwich. And that’s everybody right?? We all think it is a normal response. Every time I would have a sandwich, my stomach would get very bulbous! Bloating is a sign that your body isn’t really happy.

For some, the responses could be just physical. Constipation, bloating, diarrhoea, headaches, abdominal pain, skin complaints etc. People will not necessarily connect these symptoms to the consumption of gluten which is why it goes undetected.

For others, they may be mental symptoms.

One story in his book was about a family who had a daughter in her early twenties. In the last few years her mental health had seriously deteriorated to the point where she was in and out of institution’s and could not sustain a normal functioning life with a job or relationships. She was becoming dangerous to herself and others around her. I don’t have the book to hand so can’t remember her diagnosis, but I think it was schizophrenia and manic depression. The doctors had told the parents that this would likely be her life from now on and that she would need to be continually medicated. They refused to accept this and sought help from Dr O’Bryan.

Among conducting various tests, he found that she had a very mild intolerance to gluten, one that wouldn’t show up on a regular test. He put her on a strict gluten free diet and eradicated all processed sugars.

Within 3 months she was showing no symptoms of any kind of mental health problem. She said she was feeling the best she had done in years and she wasn’t taking any medications. The doctors were blown away.

He concludes that if you ingest something daily that you have a mild intolerance to, you might not feel the impact day to day but after 5,10, 20 plus years of eating gluten when your body and brain doesn’t like it, it will eventually catch up with you. Either through an autoimmune disease or through some mental health issues. And that girls body and brain had clearly had enough.

This story blew my mind. And I was on all-inclusive and stuffing as many bread rolls into my mouth as I could on a daily basis! I stopped as soon as I read that. I certainly didn’t have serious symptoms like that girl did, but if I’m doing all the right things and my mental health is still suffering, then maybe I have a slight intolerance to gluten?

After just 2 weeks of converting, I had all these positive physical changes happen to me. More energy, less bloating, better digestion. But I decided to commit to it for 3 months to do a full test on my mental health and the effects.

And to put it bluntly. I will never eat gluten ever again for the rest of my life.

Since doing it, I have not had any serious spells of depression whatsoever. Yes, we all have bad days, but those days would usually spiral into weeks or months for me. But not anymore. I felt light, energised, positive and content. That summer I even had these moments of ‘bliss’ where you are totally in the now and you feel so grateful for everything in your life. I had never experienced this before. (I’m not saying that is all down to eliminating gluten LOL but maybe there is a light connection!)

It makes me sad when people are so stuck in their ways that they’re not willing to try something different that could be potentially life changing. Yes, gluten free bread might not taste as good as regular, but if it stopped you from having serious bouts of depression, gave you more energy and had a positive impact on your digestive health– wouldn’t you at least try it for a few months just to know if it could work for you? You could always go back to it if it made no difference.

So after quitting caffeine for my anxiety and gluten from my depression. For the first time, I feel in control of my mental health. And I’m so grateful for that book coming into my life when it did.