I was a coffee addict. I LOVE it. The taste. The smell. The whole process of going to a coffee shop and sitting in a sunny window, watching the world go by. Using it as a positive means to be productive. Using it as a social anchor. But I got to a point when I was working in an office, and my caffeine consumption was just downright ridiculous. And this continued into my personal training work too. But how had it gotten to be so bad?

And I say addict because that’s exactly what I was. Or what most of the population are.

Panic attacks aren’t fun. Mine started in 2015 when I was travelling in South East Asia with my then partner. My caffeine addiction pretty much started at my first stop, Vietnam. They do these amazing coffees with condensed milk that drop from a metal filter that sits on your glass. From the first few days of feeling jet-lagged there, I was becoming more reliant on it. And then I was having it daily throughout my six month trip. Prior to this, I used to drink coffee on occasion, but I was a regular tea drinker.

It’s funny how my panic attacks started the same month that I began to consume a lot of coffee on a regular basis. Coincidence? Maybe. Excessive consumption of a substance that triggers anxiety? Likely.

If you’re lucky enough to not have experienced one, It can be quite hard to understand. Imagine opening the door to a police officer and feeling a wave of panic come over you before you even know what’s happened. That wave is the only way I can describe the beginning of a panic attack. Except there is no reason for you to be feeling it. Nothing has happened to prompt it. Absolutely no rhyme or reason but your chest has gone to about the size of a pea, your throat has closed up and you can’t breathe.

It was busy transport that triggered them for me. A feeling of being trapped, not being able to get off the vehicle and people being really close to me. Which was weird because usually, I had no problem being in crowded spaces.

When I came back from travelling, I went back to normal life. Except I had this additional coffee addiction with me. But actually, it was like I had grownup and was part of the adult coffee club, which everyone seemed to be in.

Then I went through a break-up some years ago and I was finding it hard to wake up in my new flat. I soon came to realise that I had gotten used to my then partner, bringing me tea/coffee in the mornings because she always got up before me.

When I realised this, I started to think of ways to fix it. I considered a teasmade however, didn’t think this was such a cool thing to have in your bedroom when you’re 27 years old. Especially when you’re single. So, I started making a flask of coffee at night before bed. And then when my alarm went off, I’d roll over, pour out hot coffee into my mug whilst I was still in bed. Genius. Or so I thought. 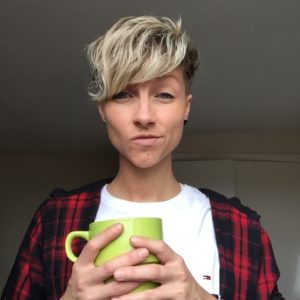 Throwback to always having a mammoth cup of coffee in hand.

Drinking 700CL of coffee before I even got out of bed started to become a pretty ingrained habit. I’d get to work and make another one. And another. And then maybe a tea and another coffee.

I became very tearful. I would step into my office, start panicking and fall into the arms of a trusted friend for tearful cuddles, to which I didn’t really know why it was happening. I then continued to have time off work for my anxiety levels and couldn’t understand why I was suffering so badly.

I left my banking job because it wasn’t making me happy. I knew I would be just existing and not living if I continued to put myself through that torment. So obviously, this would have had an impact on my anxiety too.

But it didn’t leave me completely once I became a PT. It did subside a little, but this deep feeling would still be following me around. I refer to my anxiety as my sphere of despair. Because that’s what it feels like in my chest. Deep, dark and hollow. However, personal trainers basically live on coffee. My new PT friends and I, would spend so much time in the local coffee shops when we had gaps between clients. But still I’d find myself with crippling anxiety and crying under the gym desk when nobody was there, and I had no idea why.

My anxiety was becoming so overpowering that I had to do something about it. I started to track what was triggering it. I owed myself that much to try and understand what is causing it rather than relying on Propranolol (beta blockers). I’m a firm believer that medication can help our mental health and should be used at times of need. But we shouldn’t just accept that we need to be on these meds forever. We can take our own steps to figure out what might be happening in our bodies and what can help fix it.

Everything we eat and drink, affects the way we feel, think and behave. Every single thing you put into your body has some sort of impact on you. Whether it be positive or negative, it has an effect. And it’s naive of us to think that we can’t potentially change how we feel. Because we can.

After doing some tracking, I realised that coffee was a huge trigger. I started reducing my intake from; four a day, to three, to two, to one, to only first thing in the morning, to only pre workout, to only at the weekends. But it was making me feel worse and worse. To then say to myself, this is absolutely ridiculous. Why am I clinging on to something so much when it does not serve me and makes me feel so terrible? If I had coffee on a weekend morning, it might mean that for the rest of the day I would be under a blanket on the couch feeling terrible. What a waste of life!

Throughout all this, I was still drinking tea and it hadn’t crossed my mind that this could be impacting me that much too. But turns out, it was. All of my anxious moments could be pinpointed to any caffeine drink I was consuming.

So, I quit. I made one of the hardest self-care decisions I’ve ever made, because my mental health meant more to me than a flat white. And I switched to decaf coffee. Which by the way, isn’t actually that bad. I came to realise that I loved the process of going to a coffee shop, sitting there working or chatting, and that it didn’t matter if I was drinking regular or decaf. I like the experience of being there. And that was all that mattered.

It’s been nearly two years since my last coffee and my anxiety is the best it’s ever been in my whole adult life. I’m proud of myself for coming to my own realisation, recognising my feelings and acting appropriately rather than deciding to ignore it and hope for the best. If you suffer with anxiety, maybe make an honest assessment of your caffeine consumption. Whether it’s tea, coffee, coke or energy drinks. You never know how much it could help you take back control of your anxiety.